When I signed up for my first yoga class I really had no idea what I was getting myself into.  From what I understood about yoga was that there were a bunch of candles and a room full of people stretching and meditating.  Don’t get me wrong there are plenty of yoga studios out there that are low intensity and offer classes that will allow you to relax and clear your mind, but this is not one of those workouts.  If you are curious about yoga but aren’t sure if it’s the right workout for you, allow me to try and help your decision process with my DDP Yoga review.

DDP Yoga Review – What Is It? 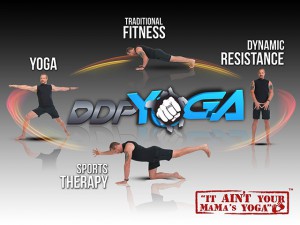 DDP Yoga was created by former professional wrestling legend Diamond Dallas Page to heal his own body after a wrestling career full of injuries.  As you can probably guess, with a former pro wrestler as your trainer the workouts can get pretty intense.

DPP Yoga incorporates many of the traditional poses that yoga offers but adds a little bit of its own style to the mix.  For example, instead of Child’s Pose in traditional yoga it is called Safety Zone in DDP Yoga.

However, just like traditional styles of yoga like Vinyasa Yoga, DDP Yoga focuses on going at your own pace and not over-doing it which is why ‘Safety Zone’ is such an appropriate name; you are encouraged to rest in this pose any time you need to.

It’s not about going extremely hard all at once, it’s about going at your own pace indefinitely.

What’s So Special About DDP Yoga?

So as I enter my first yoga class of my life I am amazed by the full room of people warming up and the body-builder sized instructor in front of the class.  At this point I had no idea I had just stepped into a DDP Yoga class but it was honestly the best thing that could have happened for my practice and my health. 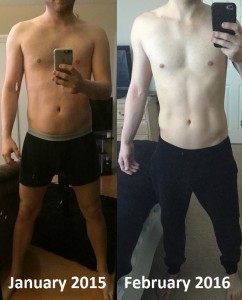 Me before and after regularly practicing yoga for a year.

DDP Yoga uses what is called ‘dynamic resistance’ as a main focus in the workouts.  Throughout the entire workout you are clenching every muscle in your body as hard as you can and it should feel like moving through quicksand as you go through the class.  It is extremely challenging at first but as your muscles start to get stronger you will begin to notice how much and how fast your body is changing.

Another huge benefit to DDP Yoga is that if you have issues with pain in your lower back, joints, knees, or any other body part that is affected by high-impact workouts, DDP Yoga focuses almost exclusively on low-impact poses.  In DDP Yoga you are not moving further than the confines of your mat, allowing your body to get stronger and heal itself from the inside out.  It really is quite amazing!

And if you are still skeptical about if DDP Yoga can help you lose weight, since you are clenching your muscles and holding these yoga poses for longer periods of time than traditional yoga, you will begin to sweat dramatically and your heart rate will be through the roof.  You start to realize that even though you are barely moving you are doing extreme cardio and your body will be shedding that excess weight before you know it! It’s hard for me to be unbiased when reviewing DDP Yoga because of how well it worked for me and help relieve my lower back pain when I was first starting out.  I am pretty average build and don’t have too much of an issue with my weight so I was able to get great results from it after a few months. It is crucial that whatever workout program you start that you stick with it and you will find the results you’re looking for.

I have since stopped practicing DDP Yoga because I moved to a city that did not offer any DDP Yoga classes so I started looking for another yoga practice that would offer me the same intensity of DDP Yoga but also allowed me to calm my mind, which DDP Yoga did not allow me to do.

If you’re looking for a great workout that doesn’t require a lot of high-impact exercises that you can practice from the comfort of your own home then no matter which style of yoga you choose you will be making the right choice. Starting a regular yoga practice is the reason I no longer suffer from chronic low back pain and can help you to.

You just have to decide to start.